Please note we can only sell air guns and pellets to persons 18 years of age and above. If you are under 25 we will ask to see some photo ID.

We can supply the full range of Weihrauch HW100 pcp air rifles.

The HW100 was the first pre-charged air rifle from Weihrauch. With excellent accuracy and vibration free shot release this fast and easy repeating pre-charged air rifle is a joy to use. The 14-shot magazine capacity offers typical refined, efficent German engineering. The Weihrauch HW100 has an integral pressure gauge and uses a quick-fill probe arrangment for speedy charging. Available in cal .177" (4.5 mm) and .22" (5.5 mm) along with .20" (5.0mm) to special order. It has two stage adjustable match trigger and manual safety.

For more details or to order the HW100S - buy online

The HW100SK is the carbine version of the sporter stock HW100 pcp air gun.

For more details or to order the HW100SK - buy online

The HW100T is the full length, thumbhole stock version of the Weihrauch HW100.

For more details or to order the HW100T - buy online

The HW100KT is the carbine length, thumbhole stock version of the Weihrauch HW100.

For more details or to order the HW100KT - buy online

The HW100S FSB is the full length version of the sporter stock HW100 with fully shrouded barrel.

For more details or to order the HW100S FSB - buy online

The HW100SK FSB is the carbine length version of the sporter stock HW100 with fully shrouded barrel.

For more details or to order the HW100SK FSB - buy online

The HW100T FSB is the full length version of the thumbhole stock HW100 with fully shrouded barrel.

For more details or to order the HW100T FSB - buy online

The HW100KT FSB is the carbine length version of the thumbhole stock HW100 with fully shrouded barrel.

For more details or to order the HW100KT FSB - buy online

The Weihrauch company as we know it today started life in 1899 making it one of the longest established gun makers still in production. The story began in the small German town of Zella-Mehlis. This is a town in the Schmalkalden-Meiningen district, in Thuringia, Germany. The town of Zella-Mehlis is the site of the original Walther Arms and J.G. Anschutz weapons factories and was also home to Sauer & Sohn. This area or Germany was teeming with expert gunsmiths and among them was Hermann Weihrauch Senior. He had a reputation for making excellent hunting rifles. He was soon joined by his three sons Otto, Werner, and Hermann, Jr. and the company soon began to grow. After the end of WWI they manufactured the first mass-produced German .22 rimfire rifle which soon gained an excellent reputation a match rifle. The second world war halted the progress of the Weihrauch company. It was not until the early 1950s that German companies were again allowed to manufacture airguns. Weihrauch then produced their first air rifle, the HW (Hermann Weihrauch) Model 50V, a smooth bore model due to the fact that the Allied Occupation Government would not allow rifled barrels. When the allied government finally allowed the production of rifled barrels it still did not allow them to produce firearms. Therefore all efforts went into making the finest sporting airguns in the world. When the firearms ban was lifted Weihrauch continued to make and develop some of the finest airguns available. The range grew to include the HW25, HW30 and HW50, the HW55 and HW55T and the very successful (and still available) HW35. With the death of Hermann Weihrauch, Jr. in 1967 control of Weihrauch was handed to Hans Weihrauch, Sr. father of today's directors Stefan and Hans-Hermann Weihrauch.

Whilst talking about Weihrauch we can not continue with touch on the Rekord trigger. This is one aspect of their air rifles that makes them so good. Designed nearly 70 years ago and still used today on the current range of Weihrauch airguns. Other manufactures has struggled to better this trigger unit and even today it is what everyone measures a sporting trigger against. The Weihrauch HW35 released in 1951 was the first model to feature this self contained unit and this is partly the reason for its success. The HW35 has been in continuous production ever since

In the 1070s a major changed happen for the Weihrauch company. A Dr Robert Beeman in America had been working on why the much smaller and lighter Feinwerkbau Model 124 and 127 Sport made more power than the heaver and much larger Weihrauch HW35. His theory was a connection between the diameter and travel of the piston combined with the size and shape of transfer port along with the weight of piston and length and strength of spring. Now with all the thousands (possible millions) of combinations how to you you work out the best combination. The answer was to use a computer, the result was the very first computer designed air rifle. Dr Robert Beeman took his newly designed airgun to Weihrauch to see if a deal could be done. That deal gave the Beeman Precision Airguns the exclusive rights to Weihrauch sales in the USA and Weihrauch the icon that is the HW80. This HW80 sold as the Beeman R1 in America changed the perception of the shooting public in the states, no longer was an airgun just a toy but it had real sporting potential. Such an Icon is the HW80/R1 that a book has been written on the subject.

With Weihrauch now a force to be reckoned with in 1983 the introduced the HW77, their first underlever. This became a favorite in the new sport of field competition shooting and led to many small home tuning companies some of which grew to become legend such as Vemom and Airmasters. The HW77 was designed to work at its best around the UK power level and was not trying to be the underlever version of powerhouse HW80. The HW77 gave birth to the HW97 but remained in the line up as the open sight version.

While Weihrauch continued to market the HW35, HW80 and HW77, they added to the range with a full size lightweight break barrel, the HW95, the target version of this the HW98, the silencer version of the HW77, the HW97 and the compact and lightweight HW99, with the lower power and small and lighter HW30 and HW25 completing the spring rifle line up.

Sitting in the recoiling camp it the only non-spring powered air rifle in the line up, the HW90. This uses the Theoben system and Weihrauch were the only company who could see enough value in this system to be willing to pay to use it under license. The idea it to replace the twangy spring with a much smoother compressed gas rem. The benefits are a much smoother and quicker firing action that could be left cocked for longer periods with out suffering spring degradation.

For the air pistol shooter the range is made up of the light weight single stoke pneumatic HW40, spring powered HW45 and top of the range recoilless pneumatic HW75. These these airguns in cover the needs of most pistol shooters with the exception of a multi-shot co2 pistol which as yet has failed to appear in the Weihrauch line-up. Maybe they feel these co2 gun are not to be considered serious enough for the likes of Weihrauch with their try sporting heritage.

With the increasing popularity of the PCP (pre changed pneumatic) air rifle Weihrauch first attempt was the HW100 and boy id they get it right first time. This is still their best seller and until fairly recently the only pneumatic pcp in the line up. 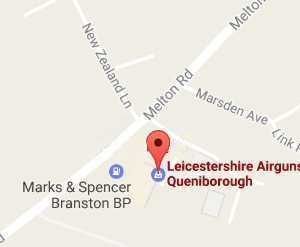 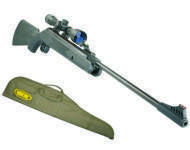 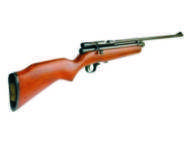 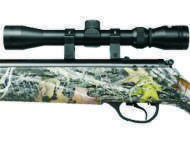 Cheap air rifles for hunting and pest control a speciality.

Cheapest airguns in Leicester. If you are looking for the best price we have the lowest prices locally and are always competitive.

Leicestershire Airguns can be found just 5 miles from the Leicester city center.
Located on the Melton Road half way between Syston and East Goscote on the
Queniborough Industrial estate. We are on the road behind the BP petrol station.
We have the largest selection of airguns on display in Leicester.
Cheapest airguns in Leicester. If you are looking for the best price we have the lowest prices locally and are always competitive.